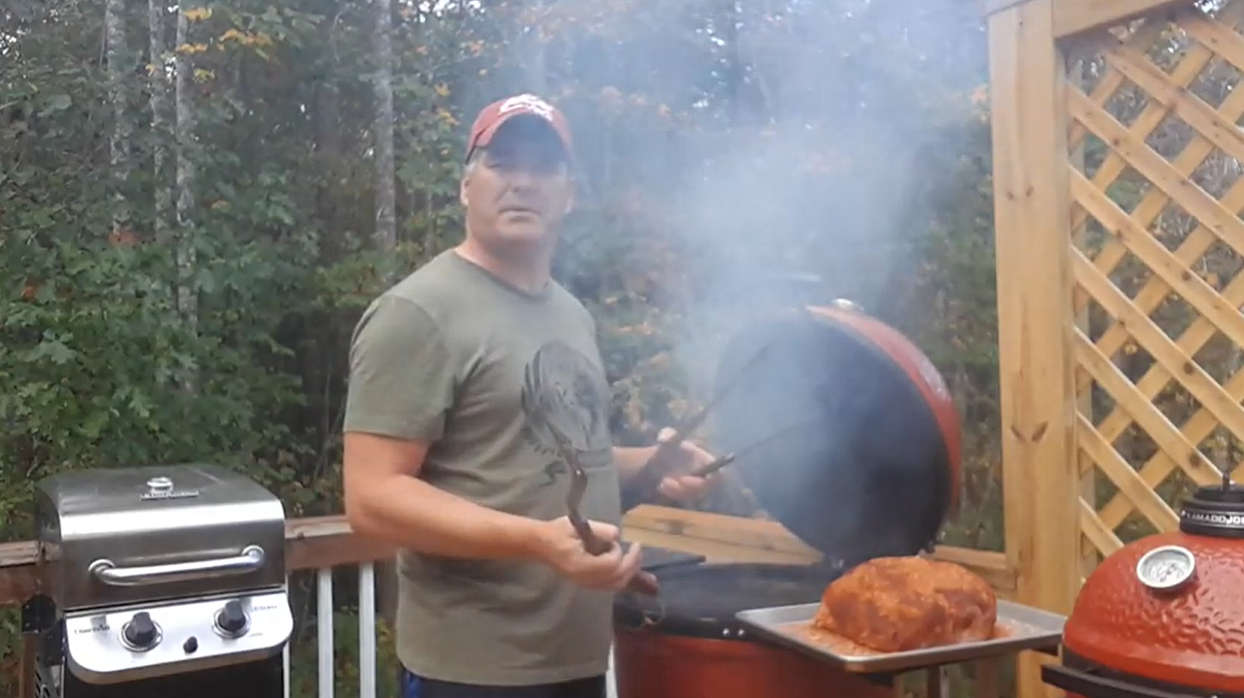 Hey, good morning everybody. I don’t usually get to record these because I’m usually outside putting things on the smoker before the sun comes up, especially as it becomes later on in the year. I’m doing a pork butt today and we’re going to be eating it for tonight, so I was able to wait until the sun came up while I was getting the smoker going. I thought it’d be nice to be able to do just a quick recording of just putting it on.

I love my kamado joe. It is a grill but it’s also a smoker. I put the deflector plates in to go ahead and block the direct heat from the coals so it didn’t sear the meat. I’ve got a nine pound Boston Butt.

I’ve gone ahead and put a dry rub onto it. I even took some tin foil for makeshift catch basin, added water and now it will catch all of the drippings so it’s not hitting that plate directly and creating a foul smoke.

Today I’m using cowboy charcoal brand. I’ve used this once before but it happens to be what was at the Ace Hardware down the street. Normally, I do like the Kamado Joe brand the best. At least so far. I’ve been trying quite a few like Jealous Devil, that’s another one that I like. Like I said, I’ve used Cowboy before. It’s not bad, but I generally like bigger lumps of charcoal for smoking.

But you work with what you’ve got. I’ve gotten the Kamado up to temperature. It’s around 250. Now when I open it, and then I go ahead and close up the vents, it’s going to drop back down. I want this to be somewhere around 210 to 225 for my temperature gauge.

Now what I’m gonna do is put the butt on and put it fat side down. Everybody has their own ways of doing it. Some people say that the flavor comes from the fat rendering and it goes down. I haven’t found that to be the case. I like the fat on the bottom because it protects from whatever direct heat there is and it helps to keep it moist. At least again, that’s my opinion.

It’s funny, because I recently did an article surveying BBQ Facebook groups about brisket and their vote was overwhelming fat side up. But that is a different meat.

So I’m just going to go ahead and put this on, and give the Kamado a burp. When I first started smoking, I was told to go ahead and burp it because sometimes it’ll flare up. Of course, I was one of those non-believers until one day when it pretty much got all the hair on my arms and I said, “okay I am doing that from now on.” Yeah, you live and you learn. That’s how this works.

So all I’m going to do is pop this on. I earlier put a rub on the meat. I’ve kind of conjured up a couple of recipes over the years so I will go ahead and list the ingredients at the bottom of this post.

What I really love about barbecue is it’s as simple as this, just put it on. Then just monitor the heat and you are smoking a Butt. That’s barbecue. Thanks for checking in have a good day.

How long to smoke a Boston Butt

Never go by time. It’s done when it’s done. A good estimation is between 6 and 10 hours. This will be dependent upon heat and the meat itself. You want to take off when the temperature is right. Try to keep it on till 195° but no need to go beyond 205°. If you do take it off earlier than this, don’t despair. I have done just fine with 180°, though it was tougher.

If you are looking for a simple vinegar barbecue recipe for your pulled pork sandwiches, check this one out.